Although most ski lifts have remained open in Switzerland during the Covid pandemic, more skiers and snowboarders than ever are choosing to go back-country skiing. Inevitably this has led to a record number of avalanche fatalities, with the number of fatal incidents this season to date more than any previous season this century. The season average is 22 fatalities, whereas this year there have been 17 already – and notably that also represents 17 separate incidents.

A handful of fatalities were from skiing off-piste, i.e. using lift-served unmarked routes, but the majority of the deaths in Switzerland have been back-country skiers and snowboarders. One would generally expect these people to be better prepared than those killed off-piste. Four of the back-country fatalities occurred when the avalanche risk was moderate. These include one in the Jura, the first avalanche fatality in this area that I am aware of in over 20 years.

One off-piste fatality of a British skier occurred below les Attelas in Verbier on 18th January when the avalanche risk was moderate. This is generally considered a ‘safe’ off-piste area, bounded as it is by lifts and groomed runs. As is usually the case, the unfortunate skier was not alone, and other people were also caught by the avalanche but survived.

Not surprisingly the majority of fatalities occur in Grabunden and Valais since these cantons are most popular for back-country touring and off-piste. However this does not mean other areas are safe. To add to the fatality in the Jura, there was also a fatality this season in Rochers de Naye amongst a group of young skiers – this in a pre-Alpine ski resort above Montreux.

The message to me seems clear. If the risk of an avalanche is considered anything more than moderate even well-prepared back-country outings would be well advised to abandon their plans. However 30% of fatalities occur when the avalanche risk is moderate (and 2% when it is low), so the advice is to thoroughly plan back-country expeditions and off-piste runs even in these conditions.

It is worth adding that every year there are also fatalities amongst other winter sports enthusiasts, typically a couple of snowshoe walkers a year die in avalanches. Additionally over 90% of avalanche fatalities are triggered by the victims and their companions.

Switzerland has the most sophisticated avalanche-warning system in the world, largely due to the sheer scale of the detection capabilities the SLF (Institute for Snow and Avalanche research) has at it’s disposal. However risk to an individual skier or snowboarder needs to be augmented by an assessment of the specific conditions the skier or snowboarder finds themselves in. It is the case that even pisted, patrolled runs can be hit by avalanches.

Many back-country skiers are well-prepared for the risk of avalanches, but I believe even resort skiers should be aware of what contributes to avalanche risk, and inspect the terrain they ski through, on or off-piste.

My golden rules are PRICK:

For those not familiar with the RECCO system, it is a very small battery-free transponder, frequently found in ski clothing and backpacks but which can also be purchased separately and attached to helmets, boots or ski jackets. In most resorts rescue teams can detect the presence of a RECCO reflector within around 200m. 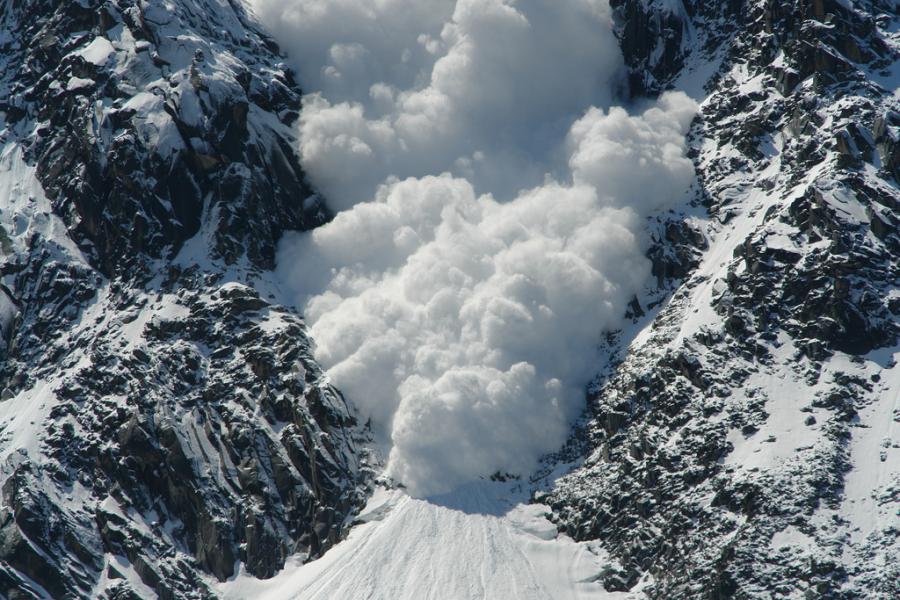 Twenty five winter sports enthusiasts have died already this season in Switzerland alone, with almost four times that number dying in the Alps as a whole.

I talked about the risks and how to mitigate them in a previous blog, so I won’t repeat myself.

However, when I read the Guardian report on the latest incident, apparently concerning a party of Italian cross-country skiers, my interested was piqued. How on earth could cross-country skiers be at avalanche risk? The good news was thwey were carrying transponders… wait a minute, is there a hard core of cross-country skiers who carry transponders in case of an avalanche. I mean those hearty types who walk in two carefully manicured tracks in their skis or who rhythmically skate around the high valley floors?

And the location. Great Saint Bernard Pass! Wait a minute, that is for hard core freeriders… and now it makes sense, they were going across the snowy countryside, in fact they were probably going across countries. Suddenly cross-country skiing has taken on a wholly different image in my mind.

Eight people died in Switzerland over the weekend from avalanches, and several others have been hospitalised according to a report from SwissInfo. Seven of a party of nine on Piz Vilan in Graubünden (just North of Grüsch) were caught by an avalanche, of whom
five died. Avalanches also killed a 28yo snowboarder in Mürren, a 31yo skier in Adelboden and one of a party of three in Wildhaus, Toggenburg. Two lucky skiers in Verbier were rescued after being hit by an avalanche. However three other people died in avalanches last Thursday and Friday, bringing the total fatalities in just three days to 11 in the Swiss Alps alone. Needless to say the avalanche risk is very high, but the level of fatalities is concerning – especially as many of the victims appeared to have been well experienced winter sports enthusiasts well-prepared for off-piste conditions.

The Institute for Snow and Avalanche Research (SLF) publishes avalanche information and the map from this morning indicates just how dangerous the Alps are after the recent heavy snowfalls. 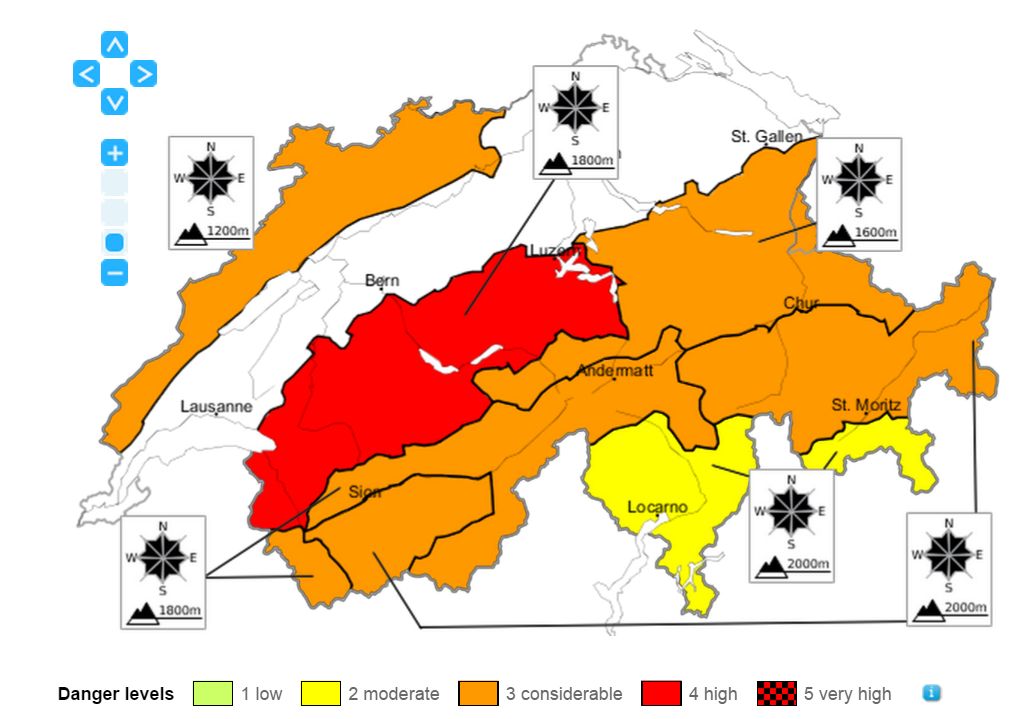 Personally I would not go outside the boundaries of marked runs anywhere at this time, but – with sufficient planning and caution – it is possible to reduce the risks of being overcome by an avalanche to near zero, even if off-piste. Indeed, it is worth bearing in mind that fatalities do occasionally occur on piste from avalanches (and in 1999 31 people were killed when the ski resort of Galtür was hit by an avalanche); knowing the level of avalanche risk and the risk factors is worthwhile even for people who do not stray off-piste.

The first consideration concerns nearby slopes as well as those you want to ski on. The overwhelming majority of avalanches occur on slopes with a gradient of greater than 35% but they can occur on slopes with a gradient of as little as 30%. Even on-piste, I tend to stay on the side furthest away from such unprepared slopes if the avalanches risk in the area is rated considerable or higher. It is also worth watching out for skiers or snowboarders traversing high on such slopes – the line that the skiers and snowboarders take can weaken a slab and initiate an avalanche. Indeed, the very presence of others skiers or snowboarders above you and off-piste is more likely to indicate heightened risk rather than relative safety since many avalanches are triggered by freeriders.

The sun helps the snow on slopes to bond, so periods without sunshine or of little sunshine, such as mid-winter, or periods of heavy snowfall and north-facing slopes tend to be associated more often with avalanches. On the SLF charts, the more avalanche prone slopes are indicated black on the compasses on the SLF chart – as the chart above shows slopes facing all directions are currently prone to avalanches. In addition wind-blown snow can often create dangerous drifts and this is more likely to happen above the treeline and at higher altitudes in general – again the SLF chart indicates that avalanches are more likely above a given altitude. The SLF will also identify whether wind-blown slopes, gullies, bowls and areas adjacent to the ridge line are particularly risky over and above the general level of risk associated with an area.

Clearly skiers and snowboarders should be prepared for off-piste conditions, with transponders, probes, shovels, ABS and cellphones amongst the minimum for back country outings, but it is a false sense of security to believe that these will be of any help in many avalanche situations. The trick is to avoid putting yourself at danger, and the signs at this time are to proceed with extreme caution, avoiding off-piste in all but the most benign circumstances.

At least the latest snow redresses a situation which left many runs patchy and off-piste snow depths often too limited to cover obstacles such as rocks and tree stumps. In the Vaud Alps well over one metre of snow has fallen in the last few days, and most of the rest of the Swiss Alps and the Western Jura have experienced up to a metre.