Feldberg is open for the 2013/4 season, albeit only one side of the resort, around Feldbergerhof. This is the less exciting part of the resort, but for a chance to try out your ski legs or to begin learning, it is perfect. The snow is pretty good, and with temperatures falling quite substantially over the next few days, the outlook for a long season in Feldberg looks promising.

The ski shops and schools are in business, but the catering facilities seem a little slower in offering service. Still, it is early days and the delight of being able to ski good snow with stunning views over the Alps and the Black Forest only a short drive from Basel is irresistible. I suspect that the Fahl area will open up at the weekends, possibly not until later in the month, before the resort is in full swing for the Christmas period.

For people who don’t ski but enjoy a seasonal walk in a winter wonderland, especially with those exceptional views, Feldberg can’t be beat. And there are even a few folk out ski-kiteboarding and out on cross-country skis.

Details on the resort are here and some footage of me skiing the resort on 4th December is on Youtube: Snow in Feldberg. 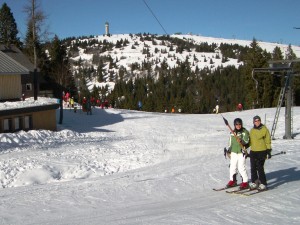 Although some of the best skiing in the world is only a couple of hours away from Basel it is possible to ski and snowboard much closer. In the Jura, in Basel-land, there is a small ski area called Langenbruck, with a couple of surface lifts and some short, gentle runs. It is accessible by public transport, but is easier to reach by car. However it is low and currently closed because of the unseasonably warm winter. The nearest resort of any size still open is Feldberg in the Black Forest.

Feldberg )resort website is here) is comparable to many of the smaller Alpine resorts in scale, although with pistes between 1448 and 945m it is quite low. Despite the altitude, however, the pistes have held up better than many higher resorts this season. There are fourteen runs – 3 black, 7 red and 4 blue – comprising around 25km of piste spread over two sides of a valley. The runs on the North-facing side of the valley, off the Grafenmatt, are mostly through the trees and are largely suitable for intermediate skiers. The runs on the South-facing side of the valley, on Seebuck, only loosely connect to the runs across the road via a ski bridge, but the area is better for beginners with a wide, gentle blue run and red runs that really should be graded blue and a good funpark all accessible by an excellent six person chair lift. On Grafenmatt it is almost impossible to escape using surface lifts, of which there are nine in the resort, although there is a modern four-seater chairlift with over 400m vertical ascent providing access to some fine red and black runs, a free ride area and a 3km-long, very challenging blue run. The combined lift capacity of the resort is 24,000 people an hour, so queues are generally short even at busy periods. Around 5km of the pistes have snow cannon cover. 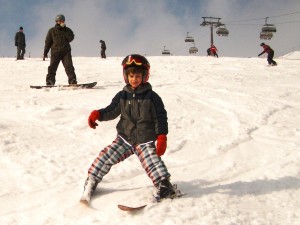 Needless to say, Feldberg is popular with weekend skiers and parking can be challenging unless you arrive early. Interestingly enough Feldberg is also popular with many skiers and snowboarders from Belgium, Holland and North Germany, for whom it is an easier trip than the Alps.

The run from Basel by car is just over an hour, driving north on the B317 from Lörrach up through the delightful Wiesental, and from Freiburg it is three-quarters of an hour (via Titisee). By public transport the trip is under 2 hours from Basel (via Freiburg) and around an hour from Freiburg with regular buses on routes 9007 and 7300 from the nearby railway station at Feldberg-Bärental. 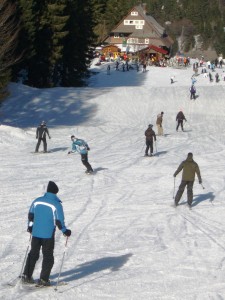 Although small, low, busy and with too many surface lifts, Feldberg is actually a delightful little resort, and highly affordable. A day pass is a reasonable 27 Euros and prices for kit hire, lessons, meals and refreshments are very competitive and there is plenty of choice. There are also number of smaller resorts in the area, including a pleasant area served by a surface lift at Altglashütten, and one served by a gondola at Belchen. All of the resort runs, public transport and a range of other amenities are available free with the “Hochschwarzwald-Card”, which is itself provided gratis for guests in local hotels (depending on length of stay). The area is good for walking and there are a number of cross-country ski circuits, an outstanding all-season water park at Titisee and various other off-piste diversions throughout the “Hochschwarzwald” area.

The standard of accommodation in the hotels and guesthouses in the Black Forest is consistently high. For families the Feldberger Hof  is supremely convenient for the slopes and has superb childcare facilities.  For the more budget-conscious I recommend the excellent family-run Landhotel Sonneck in nearby Altglashütten, a delightful village with rail connections to Titisee and a bus service to Feldberg, as well as having a small ski area in the village.

A full resort report is located at the Swiss Winter Sports web site, with a version in Dutch here.