A planned SFR140m development to provide 18 new ski lifts between Andermatt and Sedrun has been announced according to SwissInfo.
The Scandinavian ski resort developers SkiStar plan to create what will be one of the largest ski areas in Europe, backed by Egyptian billionaire Samih Sawiris who is already investing heavily in Andermatt.

There is likely to be some opposition. Few plans to link or extend ski resorts have been approved recently, with the Swiss Alpine Club and environmentalists prominent in expressing concerns at the impact. However there is little doubt that the area would benefit from upgraded infrastructure so a scaled back or phased approach is a likely outcome. 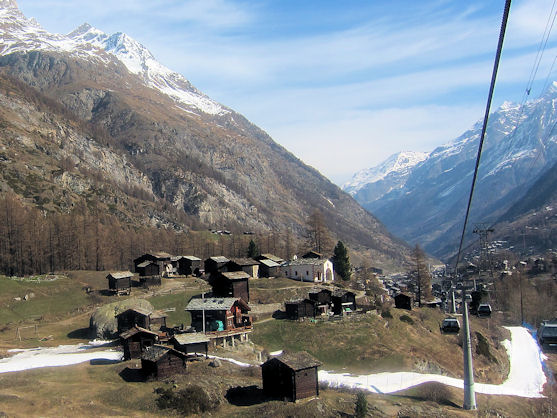 A beautiful sunny Mayday brought the close to the regular winter sports season in Switzerland. Diovalezza in the Engadin and the glaciers at Engelberg-Titlis, Glacier 3000 and Zermatt still provide some limited pistes, but to all extents and purposes the season is over. Summer skiing and snowboarding has attractions, but you need to get up early, accept a long commute and recognize that the available slopes are limited.
After two fabulous seasons, 2010/11 started promisingly. In December there were huge dumps of snow everywhere and many smaller resorts opened early to take advantage. The season did not live up to the early promise, however, and by mid-January many resorts found themselves anxiously awaiting more snow. By mid-February many smaller resorts had given up for the season and by mid-March many of the family resorts like Braunwald and Kandersteg had no piste to speak of. By the end of March only the major resorts remained open. Stoos and Gstaad, of the areas without lifts above 2000m, still had reasonable piste areas open, but some lovely little resorts with higher runs, such as Bruson, Evolène, Tschiertschen, Rougemont, Val Müstair and Grüsch-Danusa closed in March.
Many resorts had probably hoped to be open to take advantage of the late Easter holiday, but Rosswald, Villars, Sedrun, Savognin, Nax, Splügen, Brigels, Toggenburg, Obersaxen, Stoos, San Bernadino, Vals, Airolo, Pizol, Elm, Fideris, Anzère, Vercorin and Bürchen didn’t manage to last beyond the first weekend in April.
Les Portes du Soleil, Meiringen, Gstaad – apart from Glacier 3000 – Goms, Leukerbad, Belalp, Scuol, Crans, Malbun, Hoch-Ybrig, Champex-Lac, Bivio, Leysin and Arolla all surrendered before Easter, and there was minimal skiing available at Lungern, Flumserberg, Sörenberg, Lenzerheide and Disentis. Davos-Klosters, Adelboden, Val D’Anniviers, Flims and the Jungfrau all had disappointing Easter skiing and closed straight afterwards. Although they also closed immediately after Easter, Arosa, Melchsee-Frutt, Avers and Lauchernalp had most of their pistes open over the Easter weekend. Andermatt and Grächen also had most runs open, and also stayed open in the week after Easter.
The beautiful sunny weather and seasonally high temperatures through April not only stretched the skills of the resort operators, it also meant that much of the available pistes were variously icy and slushy, particularly on the lower runs. To their credit, Saas-Fee, Zermatt, Mürren, St Moritz and other Engadin resorts, Samnaun, Arosa, Verbier and other 4 Vallées resorts, Avers, and Chandolin in Val D’Anniviers all managed to keep at least one valley run open.
Through April Samnaun together with Ischgl kept open nearly all the available runs, providing over 150km throughout the Easter fortnight.  Saas-Fee also had over 90km open over Easter, and Zermatt had a reasonable amount open above Furgg into May. 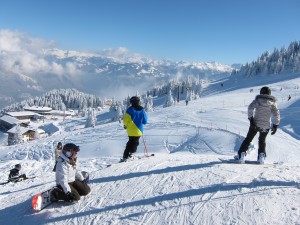