Watching Vanessa Mae, clearly an outstanding skier, navigating the Giant Slalom circuit in the Sochi Olympics just reminds me what a gulf exists between professional ski racers and the likes of us weekend skiers. Mae’s diminutive size is obviously one factor in her being something over 30 seconds off the pace, but I am always astonished at how hard some of the circuits are. The steepness of the descent is not so obvious on TV, nor how often the surface is so icy an average skier wouldn’t be able to get any edge on it at all. Visiting runs like the Lauberhorn also fails to alert you to the fact that these runs are deliberately made harder for the big races.

Mae has bought a home in Zermatt, where she has been training the last six months. Coincidentally I was in Zermatt last weekend, as I often am, but have yet to see the violin maestro on the slopes in person.

Watching Sochi and all those talented athletes tumbling on snow and ice reminds me of how their dedication must be matched in equal measure by sheer guts. So it was with interest I read an article about the injuries that winter sports athletes get.

The article quotes Lucy Macdonald, physio at Octopus Clinic Physio (which has worked with Team GB’s ski team), who says that the most common injuries for freestyle skiers are:

So be careful next time you’re in the park and you fancy trying out a little slopestyle!

The winter sports season is approaching its peak period, and the prospects for snow conditions are promising. Temperatures have dropped, new snow is forecast throughout the Alps and conditions are generally good. However the outlook is still for the weather to be warmer than the seasonal average and not particularly sunny, with the northern Alps possibly experiencing the dreaded Föhn, with its potentially dramatic increase in temperatures. Meanwhile the southern Alps has a considerable risk of avalanches, possibly rising to a high risk.

Looking around the resorts, all but a few of the low-lying resorts are fully or near-fully open. Across over 150 open resorts in Switzerland, the average snow depth at the valley stations is 50cm, with many reporting over a metre. The top stations average 105cm and Andermatt has a massive 4 metre base at the top. There seem to be no resorts covered by the Snow’n’Rail scheme that have anything less than good snow conditions.

With it being peak period, the deals and discounts around are not so plentiful. Swiss Railways has some interesting discounts in February for tobogganists, though, with a 30% discount on combined travel ticket, lift pass and toboggan hire at Fräkmüntegg (Pilatus) and Preda/Bergün. Futhermore there is massive 50% discount on the same offer for Klewenalp. 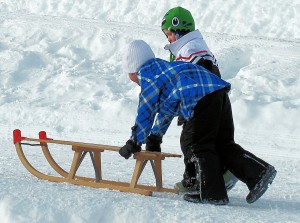 There is also a 30% discount on travel and a return lift journey at Engelberg-Brunni, the sunny side of the valley, during February – mainly aimed at people wanting a walk and a meal in the mountains. Both the Klewenalp and Engelberg offers may be sufficiently attractive for some people to use in combination or even instead of Snow’n’Rail – for example for a mixed group of skiers and non-skiers.

Further details on the February Swiss Railway discounts at their web site.