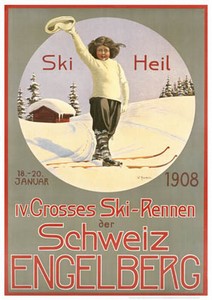 Switzerland has some of the best back country skiing and snowboarding in the world. If you’re prepared to don skins or snowshoes and trek beyond the higher lift stations you can enjoy virgin powder snow and spectacular scenery. If you prefer to have your ascents covered by lifts, however, there are still plenty of places where you can make your own tracks and escape the hoi polloi.

Many resorts in Switzerland have unprepared marked trails (denoted in yellow on piste maps) which, whilst ungroomed and unpatrolled are generally safe to use when open. Many slopes, such as those off Mont Fort in the Four Vallées ski area, at Engstligenalp near Adelboden or at Belalp-Betten and are often not even marked but require only modest care to use. There are spectacular off-piste runs from many other resorts which safely weave across and between pistes, although it should not be assumed that because virgin snow is close to a run that it is invariably safe to go there.

Some of the very best, accessible freeriding can be found  off Titlis at Engelberg, off the Gemsstock in Andermatt, off the Wissmeilen from Flumserberg or Pizol, from lenzerheide down to Arosa, above Zermatt and Saas-Fee, Piz Bernina in the Engadin and all around Davos. It should go without saying that all off-piste skiing and snowboarding has risks, and that local knowledge should always be sought before embarking on freeriding.

There is a huge amount of literature in German, and to a lesser extent, French, on skiing and snowboarding backcountry in Switzerland. The only comprehensive text in English is the 1963 translation of Walter Pause’s “Salute the Skier – the hundred best ski runs in the Alps”. I hope to revisit many of the Swiss runs he identified and update the information he provided, but interestingly I have so far found the guide to have dated far less than the colourful prose it employs. The major change is that many runs which required skins at the time are now wholly or largely served by ski lifts.

Beyond simply going off-piste Switzerland provides some of the most spectacular ski mountaineering and ski touring supported by a network of 153 mountain huts managed by the Swiss Alpine Club which provides almost 10,000 high altitude beds throughout the year. Bill O’Connor has published a series of books entitled “Alpine Ski Mountaineering”, available from Amazon, which provide the most authoritative English-language guides on the subject.

An excellent series of Freeride maps, based on the maps of the Swiss Federal Office of Topography, are available from freeride-map.com. Not cheap, but useful since they are in English. Many books are available on freeriding Switzerland, but not in English.

But probably the best way to enjoy backcountry skiing and snowboarding in Switzerland is to do it with somebody who has done it before. The English Forum bulletin board is a good place to seek experienced English-speaking skiers and snowboarders who may be open to having you join them. Also www.pistehors.com. The Ski Club of Great Britain has representatives in eight resorts who will guide members on-piste, and sometimes off-piste for free. Ski guiding from experienced guides does not come cheap, but for a group it works out realtively affordable, and many ski guiding companies organise trips that are open to anyone with the required minimum technical skills. A good place to start is the Swiss Mountain Guide Association who have literally hundreds of members to choose from.  Some other organizations offering ski touring include: 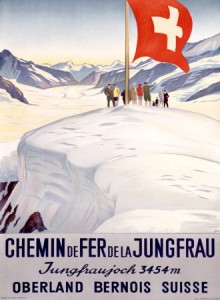 On the face of it hurtling down a mountain amidst all of it’s natural splendour under your own power appears to be making the most of the environment. It isn’t. Getting there has had an environmental impact. According to SnowCarbon a typical round trip to the Alps from London by plane produces around 180kg of CO2 per person, whilst an average car will produce 450kg of CO2. The round trip by rail, in contrast, would produce only 20kg of CO2 per person.

There are also some eco-friendly places to stay once you get to the resorts. Perhaps the best example is Whitepod above Villars.

In the resort itself there is much that can be done to reduce the environmental impact. Put plastic bottles in PET waste rather than regular waste, use recycle facilities wherever possible and avoid littering the slopes.  Thomas Allement, project leader of the Summit Foundation, quoted in SwissInfo said of the areas around the bottom of ski lifts: “You can find up to 30,000 cigarette ends at such places… and when you know that depending on where each one is it can pollute up to 500 litres of water, you can imagine the impact that has. And remember they can find their way into the intestines of fish, cows etc., it’s a whole ecosystem that’s affected.”.

Many parts of Switzerland, such as Lenzerheide and Engelberg, have resisted pressure to create “mega resorts” because of environmental concerns.  And many resorts have adopted environmental measures to reduce the environmental impact of tourism. The Ski Club of Great Britain publishes a register, provided by SaveourSnow, of many resorts and their environmental credentials. In summary, based on a checklist of recycling, green power user, traffic reduction, sewage properly managed, climate policy and green building policy, these are the ratings of Swiss resorts in the register:

It’s a very rough guide to environmental measures and I recommend you sign up to the Ski Club or SaveourSnow to find out more. Summit Riders  also provides a guide  to the environmental policies of Swiss resorts here.

Airolo, the largest ski resort in Ticino, re-opens this year after being closed for the entire 2009-10 season. Weather permitting, the resort will be open at weekends from 4th December and throughout the week from the 18th December. The resort boasts 30km of piste and is the home ski resort for Lara Gut, amongst others.

After it’s closure, Valbianca SA, financed by the canton and local commune, acquired the Airolo-Pesciüm site at auction for SFr 70,000. Although the facility is estimated as being worth Sfr 7m, it has required a huge investment to bring it up to the standards required to be both safe and attractive to winter sports enthusiasts.

Airolo-Pesciüm lies on the south side of the Gotthard Tunnel and has a rail station, making it a convenient ski resort to get to from Northern Switzerland.  The resort is covered by the discounted Swiss Railways Snow’n’Rail scheme, and a complimentary bus service is provided from the rail station during the winter sports season.

The ski region infrastructure comprises one gondola, one chair lift and two surface lifts. The top station is at 2250m and the vertical descent is almost 1200 metres, with the six pistes largely catering for intermediate skiers.