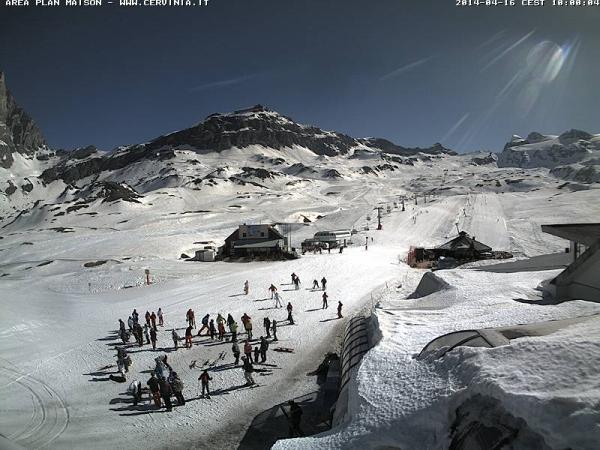 Some of the most joyous events in the ski season happen in Zermatt in late April. All the ski instructors, laid off for the season elsewhere, descend on Zermatt for a last hurrah. Unfettered by snowploughing novices, snivelling kids, off-piste wannabees that need to get picked up out of the deep stuff and all those other frustrations, they show the same joie de vivre as the cattle being released from their winter quarters onto the meadows. It is a great festival of impromptu events – slaloms, jumps, skicross and slopestyle, followed by shots and beers in Zermatt itself (Sadly Hennu Stall is now closed). This week also saw 4,500 hardy souls embark on Patrouille des Glaciers, the ski-mountaineering race that starts in Zermatt and ends in Verbier, running high above all the mountain villages along the route.

In fact, Zermatt is the resort that keeps on giving with the official end of the winter season, and the start of the summer season, in June. As the cams on this page demonstrate, even this late in the season there are still good snow conditions.

The freezing level recently has been low enough to mean that fresh snow has settled briefly in the village. None of the valley runs are open and, although the snow above Sunnegga and Riffelberg looks good, only the Kleine Matterhorn slopes are open, above Steg – but today that is still 104km to enjoy. With temperatures set to rise in the days ahead and sunnier weather forecast, the conditions will gradually deteriorate but – if you get up early enough and are prepared for a long ride up and back down, the snow before late afternoon is still worth going after.

Unfortunately Zermatt do not lower their prices for this more modest offering, so be prepared for an eye-popping CHf 86/- ticket price for a day, but the uncrowded slopes just about make up for it, especially on one of those days when the sun is so warm that you can ski in a T-shirt. A word of warning, though, the sun is fierce enough to burn you to blisters in only one day, and once the sun slips behind a cloud or a mountain, the air can be bitterly cold so do make sure you are adequately prepared.