Splügen is a good three hours from Basel, but it is an easy trip and it covered by the Swiss Railways Snow’n’Rail scheme with a corresponding 20% discount on the rail and lift passes. The journey to Chur is simple and doesn’t normally require a change, and the bus station in Chur is right above the platforms. You can actually get as far as Thusis by train, but the direct bus service from Chur is good.


I was once told that the Post Buses only run on the sections of the Swiss road network where private operators can’t make a profit. Whatever the reason, there is something reassuring about the Swiss Post Buses, with their bright livery and the certain knowledge that they will always stop outside the post office and on time. And apparently never a single fatality, which is impressive considering some of the tortuous mountain routes they cover on icy winter roads. The Bellinzona-bound bus stops and picks up right next to the Splügen lifts too, one stop before Splügen Post – the stop is Splügen Bergbahnen.

It is a strange thing about using public transport in Switzerland that you often find yourself sitting next to someone carrying a gun. You often see rifle ranges and gun magazines, even shops selling guns in Switzerland, but the most common reason to see someone with a gun is that they are on military service. And they have no ammunition. If you ask a Swiss person with a gun whether they have it to defend themselves they look askance. “Defend our country” might be the answer, but there is no machismo associated with gun ownership. I think the US constitution was a model for the Swiss, but somehow they came up with a saner interpretation of the 2nd amendment. Gun crime is low in Switzerland, but the gun suicide rate is relatively high compared to countries with low gun ownership. The irony of gun ownership is that gun owners and their families in every society are more at risk of gun crime or gun accidents than non-gun owners.

Anyway, back to the snow. Splügen is small, maybe 30km, but the slopes are OK. There is a good mix of reasonable blacks, reds and blues with enough off-piste available to keep anyone happy. The valley runs are scenic and the one alongside the gondola is pretty impressive. The lift system is not extensive but adequate, providing lift access to runs between 2215m and 1484m, and only one (largely avoidable) t-bar. One of the better small resorts in my opinion.

The restaurants and bars were good. Nothing extraordinary and no wild nightlife. This is a basic ski resort, but clearly popular with locals even with the attraction of bigger resorts nearby.

Toggenburg had somehow fallen off my list of resorts to visit, but since it is served the excellent Snow’n’Rail scheme from the Swiss Railways and looks to have a good amount of piste it seemed like an oversight on my part. I think one concern was the height, with most of the runs between 1230m and 1770m and the highest runs at 2262m, but with the cold weather and monster dumps of snow we have seen this month this was not a reason for avoiding the resort.

The trip there is relatively straight-forward. From Zurich you can go to either Buchs (for Wildhaus) or Wattvil, via Vil on the St Gallen line (for Alt St Johann and Unterwasser). The last leg is by bus, although there is also a train that runs from Wattvil and sometimes from Wil to Nesslau, shortening the bus ride to a few minutes. There are also occasional additional trains and buses from Wattvil… Ok, relatively straight-forward. Check out your schedule before you go and if you choose to vary it, remember that the trick of thinking everything runs on the hour doesn’t necessarily stand up.


Approaching the Toggenberg ski area from Wil you could be forgiven for thinking you were going the wrong way, as you seem to be leaving the Alps behind, and the Toggenberg valley starts off very gently and hilly rather than mountainous. It’s a very pretty valley, with the river Thur running through it. The last three villages in Upper Toggenburg (Obertoggenburg) are respectively Alt St Johann (900m), Unterwasser (910m) and Wildhaus (1090m) and from here you get to feel you are in the mountains again.

The three villages of Obertoggenberg are each valley stations for the main ski, with Unterwasser having the best infrastructure – a funicular railway and a cable car to take you right up to the peak of Chäserugg at 2262m. In effect it feels more like three resorts than one, with the areas above the three villages only being loosely connected to each other by pistes that are often more like trails. It works, though, and the villages at the bottom are served by a post bus route and ski buses which are free to use if you have a lift pass.

The valley is largely North-facing and, although it is the most Northerly of the main ski resorts in Switzerland, locals tell me the snow record is good. There is 60km of piste, so plenty to keep you busy for a day or two and I think Wildhaus in particular is popular with people coming for the week (Wildhaus is where Zwingli, the great Swiss reformer, was born). When I was there the slopes immediately above Wildhaus were full of learners, but further up, above Oberdorf and Gamsalp there are some nice runs. Although you can get around most of the resort without resorting to T-bars, this area, however requires you to take a long T-bar up to the summit of Gamserrugg (2076m). It is worth it, though, both for the good runs but also the spectacular views across Buchs, Vaduz in Liechenstein, the Rhine Valley and the Alps stretching away in every direction except North. one of the runs, a yellow trail, takes you down to a place called Grabs but since I didn’t have any idea whether Grabs was even on a bus route, I didn’t try it but it looked interesting. As it turns out Grabs is on the bus route from Buchs to Wildhaus. One for another day.

The area seems fine for intermediate boarders and skiers and has a few black runs and accessible off-piste for the more experienced. There aren’t so many blues, though, just one short one at Seamatt, three around Iltios and a couple at Oberdorf.

There is night skiing at the tiny resort of Ebnat-Kappel and Alt St Johann. Just as an aside, Ebnat-Kappel has 6km of piste between 650 and 1200m and is on the train line between Nesslau and Wattwil. I’ve not skied there, but if you are staying the the valley and the snow is good, it is probably worth the outing. I haven’t come across a piste map of the resort either.

There is a fair amount of nordic in the Toggenburg valley and some good back country touring apparently. Winter walkers have plenty of scope with one impressive walk from the top of Chässerrugg.

Oberdorf has a reasonably priced Berggasthaus if you want to sleep in the mountains. There didn’t look to be much in the way of apres ski activity, although I am sure there is some around the hotel bars in the evening.

Although it always looked like a great deal to get to the best slopes in Europe, Eurostar has brought the fares down even lower until the end of the season. There is now a promotional fare of £119 return for their Swiss Alps ski and snowboard service.

You have just under two weeks to do take advantage of this offer, with seats only on sale from 26 February until midnight on 11 March 2013, for travel between the 2nd March and 13th April.

In Lille you transfer to a high-speed TGV Lyria service, with stops at Aigle, Martigny, Visp and Brig stations. Eurostar and TGV Lyria will allow passengers to carry skis or snowboards at no extra cost.

Apart from the better known resorts, you might also consider Champéry in the huge Portes du Soleil or Les Diablerets, with direct trains from Aigle, or the fabulous but little known Aletsch Arena, 10 minutes by train from Brig. Valais is home to some of the most spectacular small resorts in the Alps and both Visp and brig make excellent bases from which to explore them.

This weekend I visited one of my favourite ski resorts, the Aletsch Arena. It is an extensive ski and snowboard area, with a good range of runs and facilities and spectacular view over the Aletsch glacier and across the peaks of Valais, including the Matterhorn. It is hard to fathom why it is not more popular with people from outside Switzerland because you hardly ever hear a foreign accent there. It also has a good snow record with most of the slopes above 1900m and a series of small communities offering genuine ski-in, ski-out accommodation. It is also remarkably easy to get to from Zurich, Geneva or Basel so a great choice for a day out or a weekend break. There are effectively three base stations serving the Arena, one in Mörel, one below Betten (with a huge car park) and one in Fiesch. All base stations have fast efficient cable cars and are all served by trains running between Brig and Andermatt on the Matterhorn Gotthard Bahn. 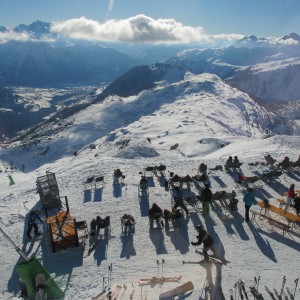 Although most of the action takes place above the Rhône Valley, there are a couple of trails down as far as 1000m, so you can do a spectacular 12km, 1800m drop off the Eggishorn all the way down to either Lax or Fiesch. Lax doesn’t have a lift back up, so you need to take the train back in either direction to get to the lifts, but for me it is the more enjoyable run. Mostly it follows a path then a road so you can’t get many turns in, but there are some nice bits of off-piste between corners in the track and there is a nice piece of off-piste just above the village – watch out for cars and trains as you cut across both a road and a railway track! The valley run into Fiesch is a tough trail, lots of moguls and steep, narrow parts, again mostly following a track. Unless you are confident in those conditions, you are probably better off taking the cable car back down at the end of the day.

Fiesch itself is a nice little town, with Inch being the most lively night spot. There’s a good range of places to stay, but I am excited to hear that the old Army Hospital just outside Fiesch has now been converted to a Youth Hostel. Although it is a fifteen minute walk from the slopes it does have its own railway station so you can take the train to one of the valley stations instead. Can’t wait until we get a chance to take a family break there.