In the wake of the sad news about Michael Schumacher, inevitably a debate is being sparked off (again) about the pros and cons of wearing ski helmets whilst skiing or snowboarding.

Let’s recap on what happened. Michael Schumacher was skiing in Meribel on the area between two pistes, somwhere between the red La Biche, the red Chamois and the blue Mauduit runs, below Saulire.

Apparently he slipped and hit his head on some rocks hidden in the snow.

I am going to conjecture that he was skiing relatively fast – he has a reputation as an adrenalin junkie, and a smack as hard as he got suggests some speed of impact. It broke his helmet in two after all. Although he was off-piste, the area is probably more accurately referred to as “between pistes”, those areas that are unprepared but within the bounds of the ski area, and are usually well tracked out by a multitude of skiers and snowboarders wanting unprepared, lift-served snow. If you hit these areas after fresh snow you can make fresh tracks, and it sounds like that is what Michael had in mind. These areas are normally within sight of the pistes, so if anything untoward happens there is usually help on hand very soon, as was the case for Michael. Only yesterday I saw a helicopter airlift someone off the slopes at Engelberg – technically it was off-piste, but within easy sight of the surrounding pistes.

Now we are not having a great ski season so far in terms of snowfall. The lower runs of most resorts are short of good snow and the pistes are thin and icy. Further up the runs are generally fairly good, but only because they have been prepared. Off-piste, however, the conditions are poor. Even where fresh snow falls, it has not yet established a decent base for you to be confident that there aren’t hidden rocks that can make you throw a ski or worse. And of course, fresh snow on a hard base is a recipe for avalanches. Early season off-piste is inherently risky and, unless you wish to court disaster, requires some caution.

In Engelberg yesterday many of the off-piste areas around the main slopes were extremely patchy, with exposed rock at various places. You could see people gingerly navigating around the exposed rock, which is of course what you should do, and some going faster than I thought safe given the risk of hidden rocks. Me and my companion decided not to venture far off-piste, the only ungroomed run we tried was the yellow trail off Titlis down to Stand, and there were plenty of exposed rocks round the edge. I saw a number of competent skiers and snowboarders slip and fall, but in all cases their speed was controlled and the falls were light, with no one needing to take advantage of the protection of a ski helmet – although most people had them.

So the question is, was Michael Schumacher unlucky or was he skiing recklessly? I don’t know, but I do know that a lot of skiers and snowboarders at Engelberg yesterday were going too fast for the conditions. I even found myself narrowing my line of descent because I knew people overtaking me would not be able to adjust their line if I skied in their way – remember the uphill skier must always give way to the downhill skier. From time to time I would also stop on the side of the piste to allow a knot of skiers or snowboarders pass before me, so I could feel comfortable about the area uphill of where I was turning.

The valley run was mayhem at the end of the day. Tired skiers and snowboarders, large areas of ice, lots of people and far too many going too fast. Inevitably there were falls and crashes.

So what has this to do with helmets? Michael Schumacher was wearing one, and reports are that he would have probably been killed if he had not been wearing one. It sounds like wearing one didn’t help him as much as one might expect, but perhaps if his behaviour on the slopes was different he would not have needed to put his helmet to the test.

On the whole, I am a cautious skier. Falling over can happen, but if you are following the FIS rules and are skiing or snowboarding within your limits – adjusting for the conditions – it is unlikely. And certainly unlikely to result in serious injury. The likelihood of a head injury is remote, but personally I don’t want to break a leg or sustain any sort of injury.

And there is the rub. I believe wearing helmets can give you a false sense of security. It does not protect you from other serious injuries and may not even adequately protect you from a head injury. If people went on the slopes dressed like hockey players, I am sure there would be far more collisions – you need only compare the manner in which people play ice hockey in a scrimmage if they are fully kitted up compared to just having skates and gloves. In a perverse sort of way, helmets may even contribute to more accidents on the slopes. Now they are cool, boy racers on the slopes act like their helmets make them piste warriors.

No, for me the best way to be safe on the slopes is to be prepared for the conditions, navigate the slopes in a manner appropriate for your skill level and constantly be aware of your surroundings.

I am not arguing against helmets. For freeriders, beginners and children they should be considered essential, and I would have few issues with them being made compulsory for children. I don’t like compulsion though, for me it is an ugly concept and seems to be too easily abused. I find education is a far more attractive option – perhaps also there could be incentives. For example, if wearing a helmet had an appreciable impact on how much insurance companies fork out, then they should offer premiums to people who wear helmets (although I have to say, I doubt that is the case). Indeed, in my experience more people get injured slipping on the ice on the streets in the resorts than get injured on the slopes – the main difference to outcomes is that they are not going fast. Interestingly the Dutch almost never wear helmets on bicycles at any age – I wonder if they werar ski helmets less too? 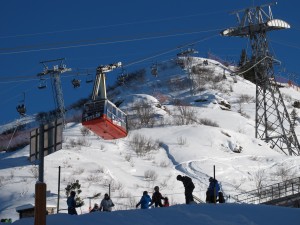 I do think education has the most significant part to play, though. I saw most of the FIS rules flouted yesterday at various times of the day. Perhaps lift companies could offer discounts to people who passed a “ski and snowboard riding test”, and their piste patrols could be a little more pro-active in advising people who flout them of what the rules are.

And in the meantime I wish Michael the very best chances of recovery, and my thoughts are with his family.

One Reply to “The Ski Helmet debate”