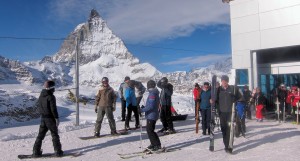 I got my first runs in for the season, at Zermatt and Cervinia. The snow was good, the temperatures suitably cold and enough lifts were open to make it a pleasant enough day. However the one problem with early season skiing is that few resorts offer much in the way of terrain, valley runs are roped off even if the snow conditions are good (to save them for the Christmas period), many lifts are closed (to save on staff costs I guess) and you still have to fork out the full price.

Not a lot of skiers out, mainly a lot of Americans and Brits – and the Italian national team on the Italian side. Lots of unfit bodies crashing around by the end of the day and a few injuries look like they got sustained. A timely reminder to get ski fit before hitting the slopes. 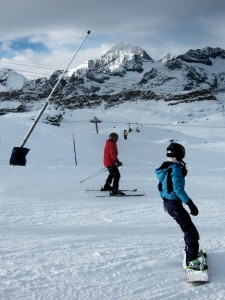 My ski legs seemed to work pretty well, but harder to get used to was altitude sickness. By the end of the season I am acclimatised to it, but in the early part of the season where most of the open runs tend to be over 3000m I need to pace myself to avoid getting nauseous.

Now where to ski next? A lot of resorts are open, but with the provisos I have previously made. There is good snow at altitude, but hopefully there will be more before Christmas. The snowline seems to be about 1300m, but there is only a few inches lower down.

Interestingly 20minuten has a deal to ski the Jakobshorn for CHF 59 including rail travel on 30th November. The deal is here. Note this is not the Parsenn, but the deal has lots of extras and is worth it for the rail pass alone. You can get information on getting to Davos Platz (the stop for the Jakobshorn) here.

That apart, the usual suspects have got some pistes open. I would tend to aim for the larger resorts with high valley stations. If you can get across to Ischgl/Samnaun, that seems to have the most open terrain, followed by Zermatt. Saas-Fee, Diavolezza (St Moritz) and Davos have enough open lifts and runs for a day out. Engelberg, Andermatt and Adelboden have around 15km open, and these and other resorts may open up more runs at the weekends. Off-piste conditions seem to be generally pretty good with moderate risk of avalanches.