The ski and snowboard season has effectively ended early across the whole of the Alps in light of the coronavirus pandemic. Numerous clusters of infections arose in ski resorts so it has not been surprising. What is more surprising is how many people persisted with their ski holidays this last week knowing that there may be a risk they would have difficulty getting home afterwards – or of catching the virus whilst abroad. It is worth bearing in mind that one of the first outbreaks that impacted the UK arose in a French ski resort. The French have, ironically, also been the last of the Alpine nations to close their season. Apparently 30,000 British nationals are stuck in the French resorts alone.

In North America the vast majority of ski resorts have now closed. Industry leaders Vail Resorts, Alterra Mountain Company, Telluride Ski Resort and the Aspen Skiing Company have closed dozens of resorts as of this weekend. Many operators had hoped to remain open during the crisis whilst taking steps to prevent the virus’s spread, but have had to face up to the new reality. Some operators claim it is a temporary measure, but it won’t be. Effectively, this season has finished in the Northern Hemisphere, and it is unlikely lifts will open this year in the Southern Hemisphere.

It is too early to say what the impact of Covid-19 will be on next season. Possibly the level of community-wide immunity to the infection from people already infected stops the spread of the disease to a significant extent before next season starts. If a vaccine is developed, however, it is unlikely to be available before next season, and ramping up production to cater for demand would take months: it could be that both of the next two seasons are wiped out.

Clearly the significantly shortened season, just ahead of the Easter holidays, is going to have a huge impact on everyone associated with winter sports. The extensive industry base that supports skiing will suffer badly. Package tour operators, chalet owners, airlines, hoteliers, restaurants, hire shops, ski schools, ski guides and ski gear manufacturers will be impacted in addition to lift operators. Many resorts are going to see their summer tourist visits plummet too. And if it runs into next season or beyond, the impact will be immense. Demand may shrink as older skiers decide it is time to quit the sport, and many potential new skiers will have chosen some other activity instead of snow sports. Lift operators will feel a huge cashflow hit which may badly impact investment and, for some resorts, even their viability.

Many industries are going to suffer from the epidemic, most will probably bounce back even at the expense of businesses going bust, but some may be changed forever. Winter sports could be one, with its expense and climate footprint having a long term impact on demand. Lower resorts facing the impact of the trend of warmer winters may see this as the time to stop their lift operations permanently. Older skiers and snowboarders may decide it is time to quit the sport, and many potential new skiers and snowboarders will have chosen some other activity instead of snow sports.

I have been lucky to get a couple of ski trips in this season, but had also hoped to get away at Easter and possibly a last hurrah at Zermatt in May. I also expect the footfall on my websites like vpnchef.com and www.snowandrail.com to plummet, and can’t see my book “Ski and Snowboard Switzerland” shifting many copies.

The Ski Club of Great Britain’s Industry Awards took place last night at the Sea Containers Hotel in London, celebrating achievements in the ski industry and providing a wonderful opportunity to mingle and enjoy the after-awards party.

In all categories there were a couple of additional commendations awarded. For airports, Bristol and Manchester joined Edinburgh, whilst our favourite airlines after BA were Swiss and Easyjet. I have some reservations about celebrating airports and airlines given their environmental impact, so I think it was a shame there were no awards celebrating contribution to the environment, but perhaps there will be next year.

The top three resorts were Wengen, Val d’Isère and Zermatt.

If Socchi left a bitter aftertaste, the Pyeongchang winter Olympics represents a wholly different games. Pyeongchang beat Munich, Germany, and Annecy, France, to host the games, and it promises a lot. With the $2.4 billion budget, rivalry with the North (who will be competing) and the first Olympics on the Korean Peninsula this will surely be a successful event, at least from a news media perspective.

The Paralymics follow from 9th to 18th March, with six sports in competition.

Korea is nine hours ahead of the UK, so a lot of the action will happen overnight or in the mornings, UK time. Eurosport and the BBC have got the rights to broadcast the games, so Ski Sunday should be well worth catching both on live TV and the red button, and hopefully there will be good coverage on the BBC’s Breakfast TV. Expect blanket coverage on Eurosport.

From a UK perspective there are a few competitors to watch out for. This will be the largest British winter Olympics team ever, and expectations are high. In Slalom, Dave Rydling must fancy his chances, whilst in the female slalom both Alex Tilley and Charlie Guest should put in a respectable run or two. In the Freestyle Ski competitions Lloyd Wallace competes in the Aerials and Emily Sarsfield in Ski Cross. James Woods, Katie Summerhayes, James Machon, Rowan Cheshire and Izzy Atkins compete in the Park and Pipe, with Woodsy looking the best bet for a medal. In the snowboard Park and Pipe Katie Omerod is the best medal prospect, but also competing will be Jamie Nicholls, Billy Morgan and Aimee Fuller. In Cross-country the Scots Andrew Musgrave and Andrew Young will be representing Team GB. The speed skater Elise Christie and the reigning Olympic skeleton champion Lizzy Yarnold will be looking for medal positions. And, of course, there is the wonderful women’s curling team!

The hugely successful US team also has its largest, and most diverse, contingent ever – indeed the largest from any nation ever with 135 men and 107 women. Alpine downhill stars Lindsey Vonn and Mikaela Shiffrin will be leading the medal charge. Teenage snowboarder Chloe Kim is one of team USA’s strongest medal contenders but will also attract attention as she is from a native Korean-speaking family.

Canada and Norway are likely to be competing with the USA to achieve the biggest medal haul. Norway’s Aksel Lund Svindal and Henrik Kristoffersen will be amongst the favourites in the Blue Riband event, the men’s downhill. Traditionally Germany has done well across all disciplines and the Netherlands bags a few golds due to the nation’s strength in speed skating.

The Swiss and Austrians, perennial rivals, will be competing to get more medals than each other. They normally get around five Golds each. The Swiss will be looking to Beat Feuz in the downhill to continue his good form this season, and Lara Gut is looking like she could recover some of her best form. Medals for Switzerland are also likely in freestyle, snowboarding, cross-country and curling. Marcel Hirscher will lead Austria’s downhill charge.

Although clean Russian athletes will be allowed to compete as individuals, following the state-sponsored doping in Socchi, Russian government officials are banned from attending the Games, and neither the country’s flag nor its anthem will be allowed.

At the more esoteric end of the scale, Nigeria will be competing in bobsleigh and Jamaica in ice hockey. 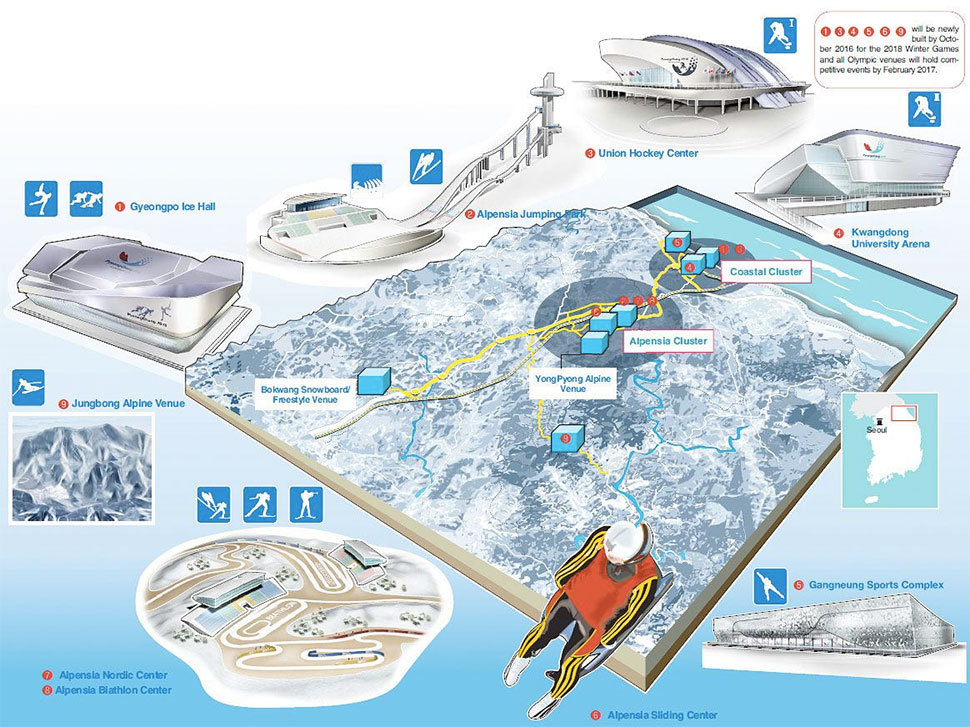 For a lot of people winter is something to be endured, a long season of cold, short days and stark skylines. The only escape seems to be a long haul flight to somewhere sunny and warm.

But nothing could be further from the truth.

In 1864 four English visitors to the Swiss Alps were due to return home for the winter. Their hotelier, Johannes Badrutt, said that they should come back at Christmas and stay until Easter, and if they didn’t find St Moritz as sunny in winter as it was in summer, he would pay their fares and hotel bills.

Badrutt won the bet, and winter tourism was born.

But what was there to do? Alpine skiing was yet to take off – Conan Doyle in nearby Davos was to have a large part to play in that story. With a well-developed summer tourist industry, St Moritz, Davos and many other resorts quickly developed a significant infrastructure to enable winter visitors to while away their days, and nights, and the longest established resorts still have a huge variety of non-Downhill activities on offer.

A recent article I read in the BA Leisure magazine, recommended a handful of resorts that suited both skiers and non-skiers. Megève, St Christoph, Cortina d’Ampezzo, Zermatt and Lake Tahoe make their shortlist, and it’s a good list. For the Americas, however, there are a number of resorts I would add to the list (see my ski USA page), and I think there are at least a couple of dozen other Alpine resorts as good for skiers as for non-skiers, particularly in Switzerland.

But what to actually do? Innsbruck, Montreux and Basel have wonderful winter markets, although they close before Christmas. Many resorts and Alpine towns have wonderful outdoor and indoor ice rinks, and professional ice hockey teams play throughout the Alpine nations, with a major hockey festival in Davos known as the Spengler Cup. Bob sleigh also features at a few resorts, and at Celerina adrenalin junkies can actually take part in a four man bob team!

More sedate winter sports available in the Alpine resorts include snowshoe trekking, cross-country skiing, curling and tobogganing. A town called Bergün is a mecca for tobogganing, with people visiting from all over Europe to take advantage of the runs there (and enjoy the breathtaking UNESCO listed railway you need to take to get to the start of the runs). My Swiss Winter Sports web site covers other winter sports you can participate in Switzerland in addition to skiing and snowboarding.

There is a network of well maintained winter walks throughout the Alps, the reward mid-way along the walk often being a charming mountain restaurant. There are even Michelin listed resorts in the Alps! Zermatt is particularly renowned for its mountain restaurants.

We love visiting resorts with spas, the best of which is probably Leukerbad, but there is plenty of choice. Villars opened a new spa this year.

Switzerland and Austria have a highly reliable and extensive transport network which makes it very easy to choose a destination suited primarily to non-skiers, but which skiers can also use as a base for day trips to a variety of different destinations. Lucerne and Innsbruck are particularly good choices.

Often the best time to go is March. The days are getting longer and the days warmer, but the snow base is usually still good. If you are prepared to leave it late to see how the snow conditions are developing, a lot of resorts provide particularly good deals before Christmas.