Car-free, family-friendly Braunwald is one of the easiest resorts to get to from Zurich, and is ideal for day skiing or a short break. Small and relatively low, the mostly South-facing 32km of piste are good for beginners and intermediates when the snow cover is good. 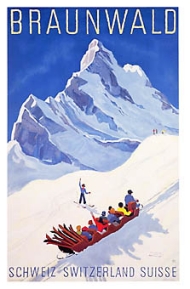 Set in Glarnerland, off the main Glarus valley and South of Glarus itself, Braunwald (1256m) is separated from the less accessible Elm resort by the 2794m Kärpf mountain. Braunwald’s best attraction is the Snow’n’Rail pass, which means you can be here for a day’s relatively inexpensive skiing  in around 1.5 hrs from Zurich, changing at Ziegelbrücke and alighting in the Linth valley at Linthal Braunwaldbahn for the cable train to Braunwald. There is a car park at the bottom station too – Braunwald itself is car-free.

Since 2007 there has been a unique combi cable car equipped with both 2 seater chairs and 4 seater gondolas which takes you to the 1901m Gumen mountain restaurant, the highest point in the resort. The more challenging skiing is above Grotzenbüehl, below can be a little flat at times so boarders need to keep their speed up.

Braunwald is good for skiers and snowboarders, with plenty of flattering slopes suitable for beginners and intermediates, and is well suited to families. There are no particularly difficult runs, although there is some reasonable off-piste from Seblengrat down to Bächital. Braunwald can get a little busy at weekends and with South-facing slopes the best of the season is relatively short. The setting is superb, however with fabulous views over the Glarus Alps towards Tödi, at 3614m the highest peak in the Glarus Alps.

Recommended is the Adrenalin hostel (www.adrenalin.gl) in Braunwald, inexpensive and convenient. The Bellevue (http://www.maerchenhotel.ch/maerchenhotel/english.php) is a good mid-priced hotel, aiming particularly for families. Braunwald itself has received the Swiss Tourism Federation’s “Families Welcome” designation.

For Dutch-speakers, the Swiss Wintersports web site has details of this and other resorts in Dutch.