I have often heard it rumoured that in the Engelberg valley lurk many hidden stashes of lift-served back country off-piste. From Titlis itself there are several areas of off-piste, the Laub being the most famous. There is also one route off Klein Titlis itself down towards Trübsee via the Steinberg some friends of mine have skied, although I have not tried it myself.

I know you can ski from the top of the Fürenalp cable car – again I have not tried it, but I know there is a trail back down to the valley floor which I guess presents at least one option. The lift company identifies a 1000m toboggan run, a 1500 winter walk and snowshoe trail as well as ski touring options at the top. There is also a restaurant. One to add to the list for sure.

Anyway, I came across an article at Worldcrunch which finally addressed the rumour. Apparently there is a lift, Sesselbahn Brisen, which ascends the Haldigrat below Engelberg to provide access to a large unprepared area of snow from 1937m.

The owner of the lift, Kurt Mathis, is quite famous, apparently, and the lift is possibly not as obscure as I had thought – even featuring in a film and having its own website. The lifts operate 9am-4pm at weekends and on public holidays in the winter season. Kurt’s wife, Antoinette, runs a restaurant and guesthouse at the top. A webcam is here. To get to the Haldigrat by train, take the Engelberg service from Luzern and get off at the request stop Niederrickenbach Station, just after Dallenwil, then take the cable car to Niederrickenbach itself and take a sign-posted 30-minute walk on a broad and well-maintained path to the valley station of the chairlift from Alpboden up to the Haldigrat. There is parking at the bottom of the Niederrickenbach cable car. Although there are no recorded fatalities or significant avalanche risks, the ski area is not only unprepared but also unpatrolled. 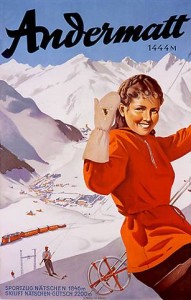