The Swiss Railways have published their Snow’n’Rail prices for 2010/2011. Here is a summary of the prices for a single day rail and lift combined, assuming you have a half-price railcard.

The ski area at Verbier and Nendaz is bigger, but the price quoted is only for the resort, not the ski region. To have access to the full Four Valleys area (and for the Saastal and Cervinia regions from Saas-Fee and Zermatt respectively) make sure you request the full region pass.

The English-language online site is at http://railaway.rail.ch/english/snow-n-rail/, but note a lot of the resorts are not available online in English – you’ll need to switch to German, French or Italian for some of them (and for prices from Ticino and Romande). You can get Snow’n’Rail from most stations in Switzerland, and you can even buy them at the ticket machines (in English) – but remember to pick up both the ticket and the voucher for the ski pass! 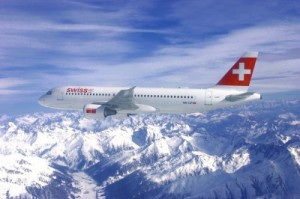 In addition to BA, Easyjet and Swiss into Basel, Zurich and Geneva, and BMI to Geneva and Zurich, there are a number of other operators with scheduled flights into Switzerland from the UK.

Snowjet have direct flights from London Stansted to Sion on weekends, providing the fastest route into the skiing areas of Valais and Vaud. In less than an hour from landing you can be in Verbier, Crans Montana, Villars, Nendaz, Veysonnaz, Thyon, Anzère, Grimentz, Zinal and a bunch of other resorts. The airport is particularly convenient for the largely undiscovered gems of Val D’Annivers. Les Portes du Soleil, Saas-Fee and Zermatt are not much further afield so it is entirely feasible to take in several of the best ski resorts in the world during a week’s vacation. Snowjet’s flights from London to Sion include free bus transfers between Sion airport and Sion bus/train station – from where ALL of Valais and Vaud’s resorts can be reached by public transport.

In addition to flights from Leeds Bradford, Manchester, Belfast and East Midlands, Jet2 is launching 2 new routes this winter from Edinburgh and Newcastle to Geneva, convenient for linking to the Snowtrain and other scheduled train services which run right out of Geneva Airport into Valais and Vaud.

Flybe have scheduled flights to Geneva from Exeter, Isle of Man, Jersey and Southampton and will have scheduled flights from Southampton to Bern from 12th February, 2011. Bern is very convenient for Adelboden, Lenk, Gstaad and surrounding resorts and the Jungfrau (Wengen, Mürren and Grindelwald), but it is also a practical option for Zermatt and other resorts in East Valais. There is a bus service from the airport  linking into the Swiss rail network.

Most airlines will charge you for carrying skis and snowboards, although some will allow you to include them in your allowance. Generally reckon on around 30 to 50 pounds of additional charges unless you get very creative. Swiss carries skis and boards for free, and you can also arrange to have your kit forwarded to any rail station in Switzerland if you send it in advance.

Remember for onward rail and bus travel to a resort from the airport the Swiss Transfer Ticket offers great value at 79 pounds, but must be purchased in advance.

Every Saturday, from 29th January till 19th March 2011 a Snowtrain will be operating from Geneva Airport through Valais. With a 79 pound Swiss Transfer Ticket that means you can easily get a connecting train to the Portes du Soleil, Verbier  and Zermatt, but with a little imagination some of the more exotic and less well-known resorts are easily reachable by connecting services – such as Leysin, Les Diablerets, Leukerbad, Nendaz, the Aletsch Arena, Crans-Montana, Lötschental, Grächen, Evolène, Anzers, Belalp and the outstanding Val D’Annivers (Chandolin, St-Luc, Grimentz, Vercorin and Zinal). The Transfer Ticket is also good for the bus as well as the train, and bus transfers are almost as easy as a train transfer.

The outward and return timetable for the Snow Train are:

The Snow Train is not the only way to get to the Swiss Alps and the regular train and bus services all have stowage points for skis and boards.  Saas-Fee and Zermatt are already open for an early season break and can be accessed almost equally easily from Zurich and Geneva airports and the Paris TGV at Basel or Lausanne.