The organization known in the four languages of Switzerland as Seilbahnen Schweiz, Remontées Mécaniques Suisses, Funivie Svizzere and Funiculars Svizras has declared the winter season 2012/13 open for business. After the bumper fall of snow over the last few days, hopefully a few more resorts will be opening their runs early. It was sad to see on a winter walk this weekend the lifts closed next door to what looked like eminently skiable slopes.

Anyway, the Cableways Association, has published some interesting facts. They report that on average lift passes in Switzerland will only be going up by about 1.27% for the coming season. They also make some interesting average costings: An average over recent years of more than CHF 400m per year of investment in lifts, 13,600 people employed to operate the lifts and 39% of pistes now with snow cannons. Additional, the cost of preparation of the winter sports terrain is typically 50,000 to 70,000 francs per km of piste,
10,000 to 20,000 francs per km of hiking trail, and 100,000 to 400,000 francs for a half pipe.

Anyway, despite the strength of the Swiss Franc the Cableways Association seems bullish about the prospects for the new season and have announced a number of new initiatives to encourage the uptake of snow sports with young people (see here for details, in French).

The truly excellent Snow’n’Rail offer from Swiss Railway is available for another winter sports season with Engelberg and the Engadine already open for business. The package is broadly the same as last season – there are only small increases in prices and the extensive selection of resorts is pretty much the same (Rosswald is the only addition). It is however now possible to buy the tickets online as well as from ticket machines (in English) and over the counter.

To recap on the nature of the offer if you are not familiar with it: For dozens of Swiss winter sports resorts you can buy a ticket to use public transport from all the major railway stations all the way to the resorts, where you can then exchange a voucher issued with your ticket to get a lift pass – sometimes there is a refundable deposit on the lift pass. The combined ticket is at a significant discount to buying the tickets separately, usually 20%. In addition you can enter a draw for a weekend break for four and can get 15% discount hiring kit from Intersport. The lift passes can be selected for 1, 2 or 6 days.

The English language web site for the Snow’n’Rail is here. The new season brochure will be available at railway stations from 1st November. It is not in English unfortunately, although at this blog’s companion site at Swiss Winter Sports every Snow’n’Rail destination is covered in detail in English. 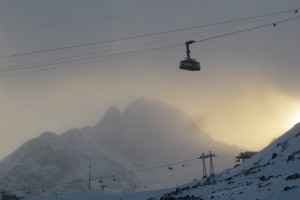 Seems hardly credible, but a ski pass in the Upper Engadine throughout the season (20th October 2012 until 20th May 2013) costs only 25 Swiss francs a day, provided you stay at least two nights in a participating hotel. And the list of hotels is extensive (see here) – and it even includes the wonderful youth hostel in St Moritz plus a range of budget accommodation throughout the Upper Engadine.

The ski pass also includes unlimited use of public transport around the area, which includes the Corviglia, Corvatsch and Diavolezza pistes.

Expect more dazzling deals in Switzerland as the season approaches.

Eurostar has launched a new weekly ski service to the Swiss Alps with tickets on sale from Thursday 11 October.

The new ski service will carry skiers and snowboarders from St Pancras International and Ashford International to the Valais region, giving access to resorts such as Verbier, Zermatt and Saas Fee from Saturday 22 December until Saturday 13 April 2013.

Passengers transfer in Lille from a Eurostar train to to a high-speed TGV, and can alight at Aigle, Martigny, Visp and Brig stations for onward transfers to their ski resorts. Eurostar and TGV Lyria will allow ski passengers to carry on-board an extra item of luggage in addition to the normal luggage allowance, such as a pair of skis or a snowboard, at no extra cost.


Nick Mercer, Commercial Director for Eurostar said “With the highest runs in Europe, spectacular scenery and reliable snow, Swiss skiing offers something for everyone. With the resorts located just a short distance from the train stations, passengers have a much more seamless journey than travelling by air.”

The trains leave London at 6.57am and Ashford at 7.28am on Saturdays, and arrive at Aigle at 3.47pm, Martigny at 4.13pm, Visp at 4.57pm and Brig at 5.08pm. This realistically makes all the resorts of Valais and Vaud accessible via this service, using the excellent Swiss transport network completing the journey. From Martigny, Verbier is less than an hour away by train whilst from Aigle, Champery in the Portes du Soleil, Villars, Leysin and Les Diablerets all less than an hour away. Saas-Fee is less than an hour and Zermatt is almost exactly an hour from Visp. Brig gives access to the outstanding Aletsch Arena, with the resorts at Riederalp and Bettmeralp only 45 minutes away. There are also a clutch of smaller, lesser known resorts in Valais easily accessible from the ski train.

The news of this service has not been so well received by the Tourist Agencies in the Bernese Oberland and Graubünden. Britain has more tourists visit Switzerland than any other overseas country apart from Germany, but the strong Swiss Franc has led to a decline in visitors. I suspect that some visitors who would otherwise go to other parts of Switzerland may be tempted to sample Valais or Vaud, and let the train take the strain, at the expense of the Bernese Oberland and Grabünden. However, despite the undoubted convenience of the Eurostar service, all of Switzerland is accessible by train (see here for details).