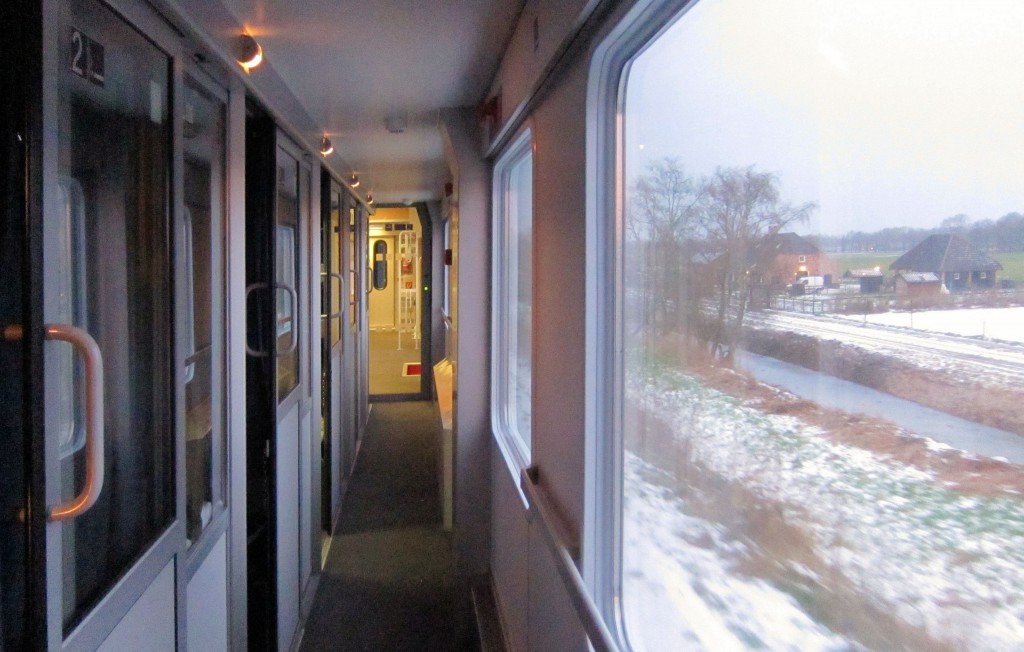 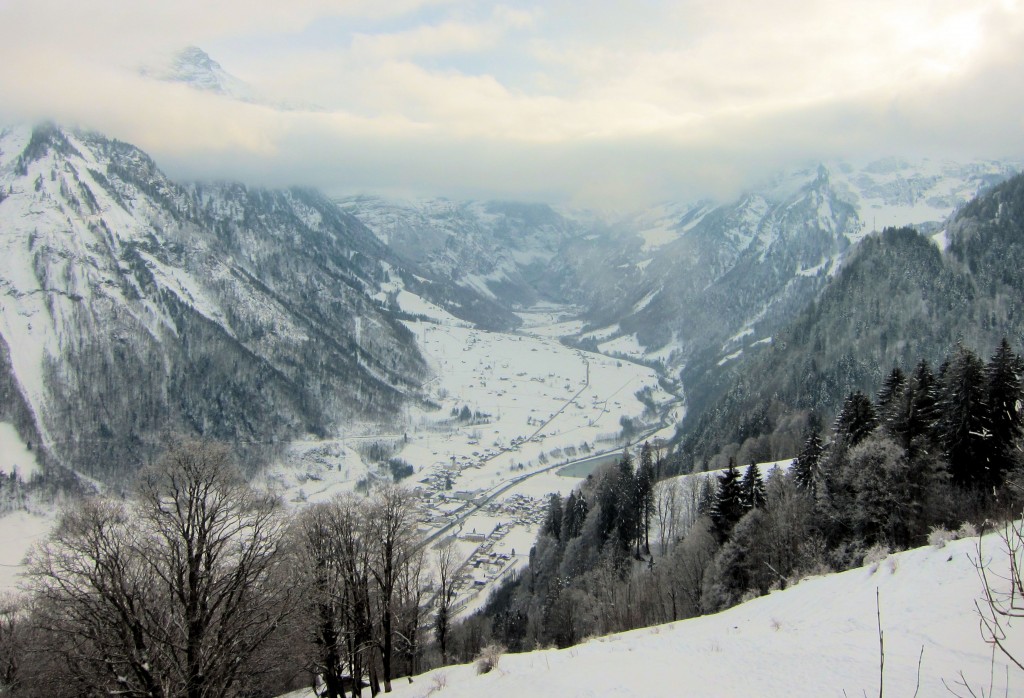 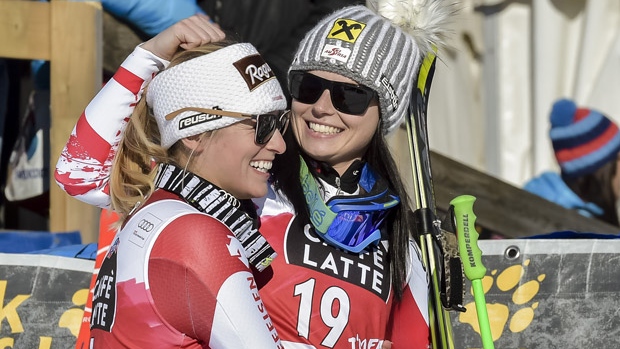 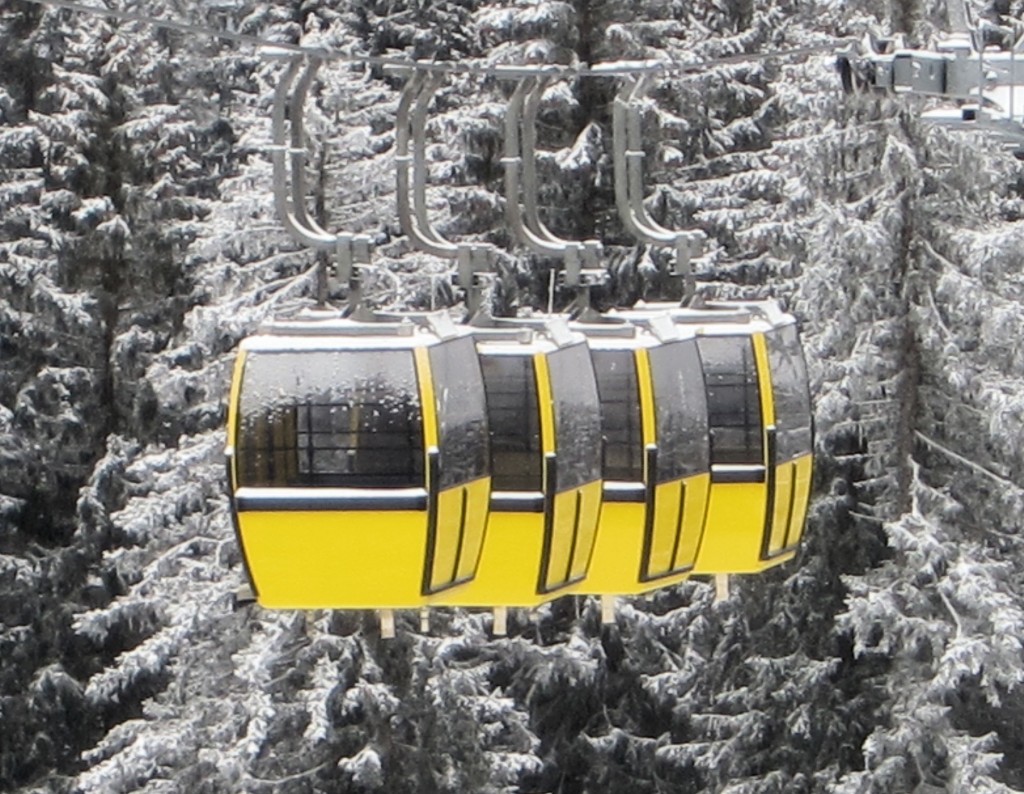 Toggenburg had somehow fallen off my list of resorts to visit, but since it is served the excellent Snow’n’Rail scheme from the Swiss Railways and looks to have a good amount of piste it seemed like an oversight on my part. I think one concern was the height, with most of the runs between 1230m and 1770m and the highest runs at 2262m, but with the cold weather and monster dumps of snow we have seen this month this was not a reason for avoiding the resort.

The trip there is relatively straight-forward. From Zurich you can go to either Buchs (for Wildhaus) or Wattvil, via Vil on the St Gallen line (for Alt St Johann and Unterwasser). The last leg is by bus, although there is also a train that runs from Wattvil and sometimes from Wil to Nesslau, shortening the bus ride to a few minutes. There are also occasional additional trains and buses from Wattvil… Ok, relatively straight-forward. Check out your schedule before you go and if you choose to vary it, remember that the trick of thinking everything runs on the hour doesn’t necessarily stand up.


Approaching the Toggenberg ski area from Wil you could be forgiven for thinking you were going the wrong way, as you seem to be leaving the Alps behind, and the Toggenberg valley starts off very gently and hilly rather than mountainous. It’s a very pretty valley, with the river Thur running through it. The last three villages in Upper Toggenburg (Obertoggenburg) are respectively Alt St Johann (900m), Unterwasser (910m) and Wildhaus (1090m) and from here you get to feel you are in the mountains again.

The three villages of Obertoggenberg are each valley stations for the main ski, with Unterwasser having the best infrastructure – a funicular railway and a cable car to take you right up to the peak of Chäserugg at 2262m. In effect it feels more like three resorts than one, with the areas above the three villages only being loosely connected to each other by pistes that are often more like trails. It works, though, and the villages at the bottom are served by a post bus route and ski buses which are free to use if you have a lift pass.

The valley is largely North-facing and, although it is the most Northerly of the main ski resorts in Switzerland, locals tell me the snow record is good. There is 60km of piste, so plenty to keep you busy for a day or two and I think Wildhaus in particular is popular with people coming for the week (Wildhaus is where Zwingli, the great Swiss reformer, was born). When I was there the slopes immediately above Wildhaus were full of learners, but further up, above Oberdorf and Gamsalp there are some nice runs. Although you can get around most of the resort without resorting to T-bars, this area, however requires you to take a long T-bar up to the summit of Gamserrugg (2076m). It is worth it, though, both for the good runs but also the spectacular views across Buchs, Vaduz in Liechenstein, the Rhine Valley and the Alps stretching away in every direction except North. one of the runs, a yellow trail, takes you down to a place called Grabs but since I didn’t have any idea whether Grabs was even on a bus route, I didn’t try it but it looked interesting. As it turns out Grabs is on the bus route from Buchs to Wildhaus. One for another day.

The area seems fine for intermediate boarders and skiers and has a few black runs and accessible off-piste for the more experienced. There aren’t so many blues, though, just one short one at Seamatt, three around Iltios and a couple at Oberdorf.

There is night skiing at the tiny resort of Ebnat-Kappel and Alt St Johann. Just as an aside, Ebnat-Kappel has 6km of piste between 650 and 1200m and is on the train line between Nesslau and Wattwil. I’ve not skied there, but if you are staying the the valley and the snow is good, it is probably worth the outing. I haven’t come across a piste map of the resort either.

There is a fair amount of nordic in the Toggenburg valley and some good back country touring apparently. Winter walkers have plenty of scope with one impressive walk from the top of Chässerrugg.

Oberdorf has a reasonably priced Berggasthaus if you want to sleep in the mountains. There didn’t look to be much in the way of apres ski activity, although I am sure there is some around the hotel bars in the evening. 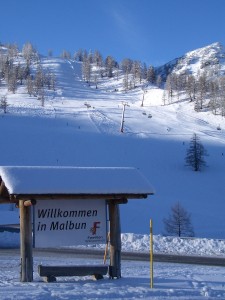 Car-free, family-friendly Braunwald is one of the easiest resorts to get to from Zurich, and is ideal for day skiing or a short break. Small and relatively low, the mostly South-facing 32km of piste are good for beginners and intermediates when the snow cover is good.

Set in Glarnerland, off the main Glarus valley and South of Glarus itself, Braunwald (1256m) is separated from the less accessible Elm resort by the 2794m Kärpf mountain. Braunwald’s best attraction is the Snow’n’Rail pass, which means you can be here for a day’s relatively inexpensive skiing  in around 1.5 hrs from Zurich, changing at Ziegelbrücke and alighting in the Linth valley at Linthal Braunwaldbahn for the cable train to Braunwald. There is a car park at the bottom station too – Braunwald itself is car-free. 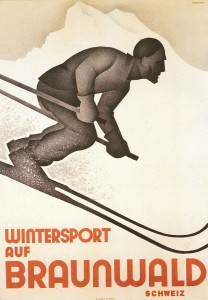 Since 2007 there has been a unique combi cable car equipped with both 2 seater chairs and 4 seater gondolas which takes you to the 1901m Gumen mountain restaurant, the highest point in the resort. The more challenging skiing is above Grotzenbüehl, below can be a little flat at times so boarders need to keep their speed up.

Braunwald is good for skiers and snowboarders, with plenty of flattering slopes suitable for beginners and intermediates, and is well suited to families. There are no particularly difficult runs, although there is some reasonable off-piste from Seblengrat down to Bächital. Braunwald can get a little busy at weekends and with South-facing slopes the best of the season is relatively short. The setting is superb, however with fabulous views over the Glarus Alps towards Tödi, at 3614m the highest peak in the Glarus Alps.

Recommended is the Adrenalin hostel (www.adrenalin.gl) in Braunwald, inexpensive and convenient. The Bellevue (http://www.maerchenhotel.ch/maerchenhotel/english.php) is a good mid-priced hotel, aiming particularly for families. Braunwald itself has received the Swiss Tourism Federation’s “Families Welcome” designation.

For Dutch-speakers, the Swiss Wintersports web site has details of this and other resorts in Dutch.