It has been mooted for some years. What has been a famous off-piste tour has finally become something for everyone. From December what some claim is the largest linked ski resort in Graubünden will open with a gondola running between Arosa and Lenzerheide. The only real downside is that you have to take the gondola in both directions – you cannot ski on piste between the two resorts, although there is an off-piste itinerary you can take. Maybe one of these days it will be marked and patrolled. 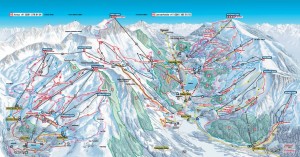 You can click on the map to get a better idea of the terrain, with a full-size piste map available from either the Lenzerheide or Arosa pages at SwissWinterSports.co.uk.

I’ve always loved Lenzerheide, but by public transport you need to take a bus – not the end of the world, but it is always nice to let the train take the strain. Conversely, much though I like Arosa with its spectacular railway link, the ski area itself has always felt a little limited. For some time the gemeinde in Lenzerheide had opposed the link but they have recanted and now this new super-resort is a reality.