The Swiss Railways provide an excellent discount deal for skiers, called Snow’n’Rail, which typically discounts the price of a rail ticket to a ski resort by 20% and the lift pass by 10%. it is available online or at Swiss Railway stations.

The new schedule for 2020/21 is out, and it is always interesting to see which new resorts have been added and which have fallen off the scheme. Sadly there have been some substantial losses this year – Zermatt, Saas-Fee, Gstaad Mountain Rides and the Vaud resorts (Leysin, les Diablerets and Villars-Gryon).

That still leaves a number of outstanding destinations such as Engelberg, Andermatt, Davos, St Moritz, Wengen, Portes du Soleil and Verbier, amongst others.

The brochure available at railway stations is thin on details this year, relying on you to see what is available at the Swiss Railways web site. Where routes include buses or cableways, these are also included in the offer. Swiss Railways also offer discounts on a number of other rail and winter sports combinations, such as tobogganing, snowshoe walking and cross-country skiing.

The Austrian Railways, ÖBB, offer a similar scheme which includes world class resorts like St Anton and Kitzbühel. They also run overnight services from Amsterdam, Hamburg and Düsseldorf to the ski resorts and a shuttle to Kitzbühel from Munich.

A full list of Alpine resorts which have a railway station is at the Snow and Rail web site. Daniel Elkan at SnowCarbon can assist people wanting to get to the Alps from the UK by train, offering a wider selection of resorts where the last leg might require a bus or taxi transfer. 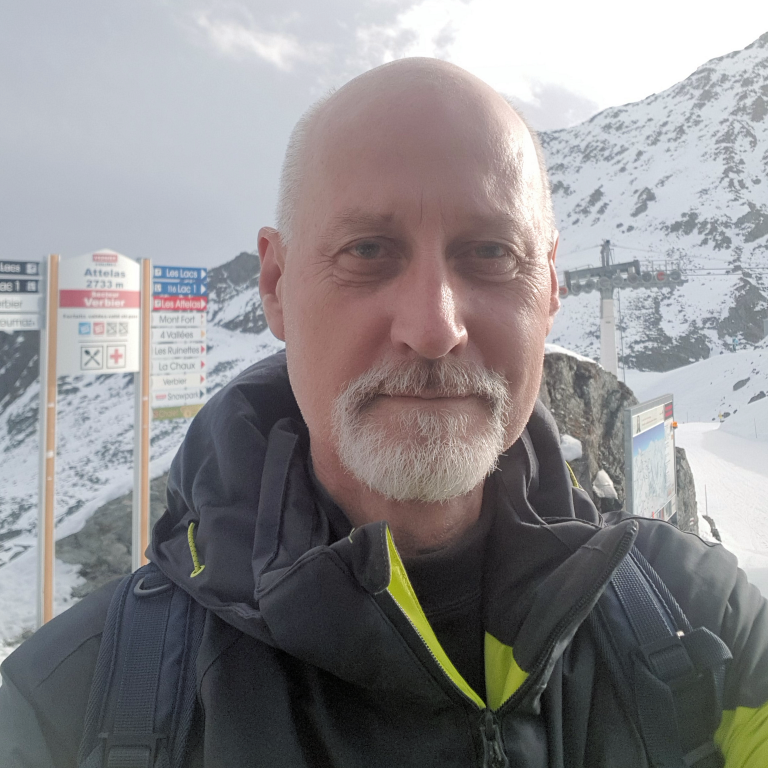 With Covid-19 rampant throughout the Alpine nations, the question many people have been asking is: “Will I be able to ski this season?”. The answer is yes – at this time at least – if you are not otherwise prevented from visiting the Alps by Covid restrictions.

I came out to Switzerland from London in October, before lockdown in the UK, and had 10 days of quarantine once I arrived. With online shopping for groceries and family and friends only a click away, isolation passed quickly. Furthermore my confinement was deep in the Swiss Alps, in Aigle in the upper Rhône valley , with the slopes of les Portes du Soleil, Leysin and Villars visible from my windows, and the peaks of les Dents du Midi towering over the valley.

Sadly the season is too early for the most nearby resorts to be open, but there is always skiing on the Matterhorn Glacier Paradise, so as soon as I exited quarantine, I was on my way to Zermatt.

In a subsequent post I will focus on the impact of Covid-19, but for now I will concentrate on the skiing. Although there is skiing out of Zermatt all year round, summer skiing is limited and the slopes tend to turn to mush by lunchtime. November heralds the start of the winter season; however the snowline is still too high to allow for much of the resort to be open, with only the area above Trockener Steg at 2939m open on a pretty creditable 26km piste. Most years you would also be able to connect to the slopes in Cervinia, across in Italy, but the border is closed at this time due to Covid-19

But the good news is that the snow above Zermatt is near perfect and the pistes are wonderfully quiet.

Zermatt is an expensive resort, and you might well ask if it is worthwhile when so little is open. Furthermore there is limited off-piste and the available runs are all limited to cruisy reds and blues. I can only offer the opinion that this quality of lift-served skiing, in November, is not available anywhere else in the Northern Hemisphere. Zermatt never rests on its laurels and every year there are lift improvements. Even though you need to take three cable cars to get to the highest point, at a dizzying 3883m, you can be skiing a little after 9am with an 8.30am start.

A large proportion of the other skiers are ski instructors, in training for a new season – most of which seems to involve warming up and talking. As a result the slopes are delightfully uncrowded and you can do some runs without seeing another soul the whole way down.

I would have liked to stay in Zermatt longer, but with a lockdown imminent I decided to slip in a day’s skiing in Verbier before returning to Aigle. Verbier opened up for weekend skiing only and has, in effect, only one open run. Whether that was worth skiing, I was about to find out.

What are the ski resorts like at this time of year, before the season fully starts? Ignoring the impact of Covid-19, the resorts are still in effect in off-season mode and most hotels, bars and restaurants are still closed. Those that are open are quiet. Add to that the impact of Covid-19 and the whole experience of skiing in autumn is not what most skiers and snowboarders would recognise as a winter sports vacation. If you are coming primarily to ski and snowboard though, Zermatt definitely gets my vote. But what of Verbier?

Sadly, Verbier fell somewhat short of the experience in Zermatt. The only slope open is the run off Attelas at 2727m down to le Lac des Vaux. It’s a short blue run, with the dogtail of the red run off Chassoure providing a little variety. There’s a number of off-piste runs down to the lake too, but the snow cover is very thin and I wouldn’t recommend them.

When I got to Attelas, having taken one of the first gondolas up, the run was busy but not too crowded. It got more crowded as the day went on and queues developed at the lift back up to Attelas, but the crowds and queues were acceptable. The ski and snowboard set were different from Zermatt, being mostly younger skiers and families on a day trip from nearby towns.

The snow deteriorated through the course of the day and was more like spring skiing than was the case in Zermatt where the base held up throughout the day. The volume of skiers also led to moguls forming on the steeper section of the run.

It’s clearly very early in the season and the snow line is above 2500m on North-facing slopes. If the temperatures start to drop and there is more precipitation, the section above Les Ruinettes will also open, providing a reasonable variety of piste. However the prospect at this time is for warm, sunny days and it might not be before December when Verbier can offer more pistes. If, however, you are in the region and fancy getting a couple of turns in, Verbier is open for business.

A number of other resorts have limited skiing at this time, almost exclusively in Switzerland, including the glaciers on Titlis (Engelberg) and Diablerets (Glacier 3000). However there are only a few kilometres of piste open at these resorts, and the few others that I think will be open for weekend skiing will be very limited. More promising is Saas-Fee, which claims to have 53km open, and that will be my next port of call. I like Saas-Fee, having first visited the resort over a quarter of a century ago and been several times since. I did ski there early in the season one year before, and found the ski conditions pretty good.

Of course, snow conditions are not the only consideration when going skiing or snowboarding in these Covid times. I’ll cover that in my next blog article.

The ski and snowboard season has effectively ended early across the whole of the Alps in light of the coronavirus pandemic. Numerous clusters of infections arose in ski resorts so it has not been surprising. What is more surprising is how many people persisted with their ski holidays this last week knowing that there may be a risk they would have difficulty getting home afterwards – or of catching the virus whilst abroad. It is worth bearing in mind that one of the first outbreaks that impacted the UK arose in a French ski resort. The French have, ironically, also been the last of the Alpine nations to close their season. Apparently 30,000 British nationals are stuck in the French resorts alone.

In North America the vast majority of ski resorts have now closed. Industry leaders Vail Resorts, Alterra Mountain Company, Telluride Ski Resort and the Aspen Skiing Company have closed dozens of resorts as of this weekend. Many operators had hoped to remain open during the crisis whilst taking steps to prevent the virus’s spread, but have had to face up to the new reality. Some operators claim it is a temporary measure, but it won’t be. Effectively, this season has finished in the Northern Hemisphere, and it is unlikely lifts will open this year in the Southern Hemisphere.

It is too early to say what the impact of Covid-19 will be on next season. Possibly the level of community-wide immunity to the infection from people already infected stops the spread of the disease to a significant extent before next season starts. If a vaccine is developed, however, it is unlikely to be available before next season, and ramping up production to cater for demand would take months: it could be that both of the next two seasons are wiped out.

Clearly the significantly shortened season, just ahead of the Easter holidays, is going to have a huge impact on everyone associated with winter sports. The extensive industry base that supports skiing will suffer badly. Package tour operators, chalet owners, airlines, hoteliers, restaurants, hire shops, ski schools, ski guides and ski gear manufacturers will be impacted in addition to lift operators. Many resorts are going to see their summer tourist visits plummet too. And if it runs into next season or beyond, the impact will be immense. Demand may shrink as older skiers decide it is time to quit the sport, and many potential new skiers will have chosen some other activity instead of snow sports. Lift operators will feel a huge cashflow hit which may badly impact investment and, for some resorts, even their viability.

Many industries are going to suffer from the epidemic, most will probably bounce back even at the expense of businesses going bust, but some may be changed forever. Winter sports could be one, with its expense and climate footprint having a long term impact on demand. Lower resorts facing the impact of the trend of warmer winters may see this as the time to stop their lift operations permanently. Older skiers and snowboarders may decide it is time to quit the sport, and many potential new skiers and snowboarders will have chosen some other activity instead of snow sports.

I have been lucky to get a couple of ski trips in this season, but had also hoped to get away at Easter and possibly a last hurrah at Zermatt in May. I also expect the footfall on my websites like swisswintersports.co.uk and www.snowandrail.com to plummet, and can’t see my book “Ski and Snowboard Switzerland” shifting many copies.