Despite the weak pound providing a welcome boost for UK seaside resorts, if you want the white stuff you pretty much have to go abroad, the often excellent Scottish resorts notwithstanding. The most ecological way to get to the Alps is undoubtedly by train, and one of the best options is the special Eurostar ski train that runs from 17th December this year until the 8th of April.

Tickets for the service this winter have just gone on sale. Two trains will run each week, leaving London St Pancras on Friday evening and Saturday morning for Bourg St Maurice, with drops convenient for a number of French resorts – particularly Les Arcs.

I can remember ski trains being pretty lively, with disco carriages at one time, but the frivolity is rather more limited these days and no alcohol is permitted on board.

Tickets are available from eurostar.com.

As an alternative, scheduled Eurostar services now run to Lyon (or you can take normal Eurostar trains to Paris and change if the direct Lyon train times don’t suit you). From Lyon you can take a Lyria train direct to ski resorts in France and, in particular, Switzerland. More details on various options for taking the train to the slopes are given at snowandrail.com. 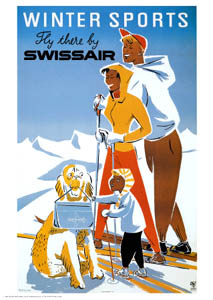 If you are fortunate enough to live in Switzerland, or have some other reason to be in or near Switzerland between November and May, it is remarkably easy to take a day trip to the Swiss Alps. Although it is convenient to use a car, there is very little reason not to take public transport. The travel times are comparable, it is at least as convenient by public transport and the ecological footprint is smaller. In addition many trains provide buffets and if they don’t, the local kiosk or Co-op can sell you snacks and refreshments to take with you. It is quite acceptable on Swiss trains to bring on board your favourite tipple to enjoy apres ski in the comfort of your return journey, reflecting on your day in the mountains whilst the mountain scenery passes alongside.
Probably the most cost-effective way to ski or snowboard is to take advantage of the Swiss Railways “Snow’n’Rail” scheme, which offers discounts on ski hire from the ubiquitous Intersports hire shops and significantly reduced charges for a combined rail and ski passes. You receive a ticket and a seperate voucher for the ski pass which can be exchanged for a ski card at the mountain resorts. Often there is a small deposit on the ski card, typically 5 SFr, redeemable when you return the card. The ticket and voucher can be purchased at railway stations either at a counter or from a ticket machine. The ticket machines will guide you through the purchase in English, French, German or Italian, and the online and printed brochures promoting the scheme are available in these languages too – although only the German version is comprehensive and the online versions are only available in season. 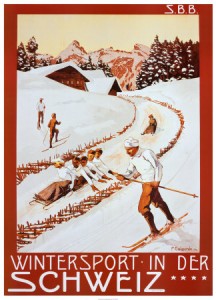 You can buy Snow’n’Rail passes for one or two days. There are also some destinations which offer six days passes, Engadin St Moritz being the most attractive. Astoundingly you can get to most ski areas in Switzerland by public transport on a day pass and get a full day’s skiing, provided you are willing to get up early enough! Some Snow’n’Rail desinations involve a combination of train and bus – don’t be put off by using buses, the buses are as efficient as the trains and the transfers are usually as easy as they are between trains. Most stations, hire shops and ski areas provide storage facilities if you don’t want to carry your gear around with you when you ski, although many regulars of the Snow’n’Rail service I know literally leave home in their ski boots ready to leap off the destination lift or train right onto the slopes.
Snow’n’Rail is not just for residents or people passing through Switzerland. It is entirely feasible to take a flight to Zurich Airport and get a full day skiing at somewhere like Flumseberg, two hours away from the terminal. An evening flight to Basel and a night at the YMCA near the station means you can get a full day skiing the next day at resorts like Wengen and Engelberg. Flying into Geneva on a Friday and staying at a hostel in Zermatt can give you two full days on the slopes before you return home on a Sunday evening flight.
Snow’n’Rail’s online brochure is produced seasonly, but this link will help you navigate it when it is available.