Gstaad has that ring of opulence about it, although in truth it is a sleepy town where I have had to wait for the cows to cross the road whilst driving through it. Zweisimmen doesn’t have the same cachet, but for me it gives you access to the very best slopes in the Gstadd Mountain Rides.Gstaad Mountain Rides comprises 6 sectors for pricing purposes and 10 distinct ski areas. Although Glacier 3000 is included in the pass it really is geographically closer to Les Diablerets, whilst the rest of the runs are mostly below 2000m. Getting around these runs in the Simmental and Saanenland is a doddle with a train running from Zweisimmen across the Röstigraben to Châteax D’Oex connecting most of the areas up, and the train is included in the lift pass. 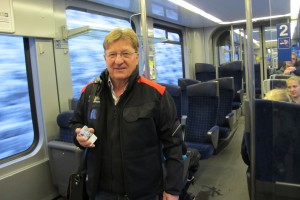 However the largest ski area is best accessed from Zweisimmen, reached easily by a train from Berne on the BLS service. A useful feature of the service is that, if you have a Snow’n’Rail combined train and lift pass, somebody comes round the train at weekends to trade in your lift voucher for a lift pass. That means you can get straight off the train, walk the 200 yards to the gondola and go straight up to the slopes. How’s that for service!

I had been thinking of going to Lauchernalp above the Lötschental, where this time of year the local carnival is celebrated with people dressed as the fearsome Tschäggättä, even on the slopes. However it is a high resort and it promised to be a cold day, so I opted for the lower runs above Zweisimmen. Even though the runs are low, however, I’ve always found the snow holds well here, with shaded tree-clad slopes and sheltered off-piste.

The snow was excellent after an indifferent January in the Alps. No bare patches and lots of new snow, with powder off-piste. New snow overnight meant that the extensive off-piste here was untracked. There is quite a lot of gentle off-piste around. There’s some on the Rinderberg and above St Stephan, and stuff around Hornberg, but both sides of the valley above Chaltebrunne have wonderful areas that are great fun to explore in new snow. I am always surprised there are not more boarders here, since nearly all the runs are served by gondolas and chairlifts, there are no real flat areas, there’s a park and there is so much easy, lift-served off-piste. 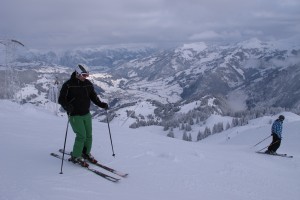 Anyway, all round a good gig. One of my favourite resorts, especially for mid-winter.